A Halloween Murder Mystery for Erimus

With guests from Cleveland and Stokesley clubs invited, the Erimus rotary meeting on Tuesday 25th October lived up to its Halloween billing.

A cast of six enacted a country house murder in which the butler was despatched with a sword in the billiard room.

After a single full rehearsal it was the forced ad libs which got the best audience response and great fun was had by all.

Various clues and wild geese were chased across the script and when ‘Detective Inspector’ alias Stuart Davies produced the ‘Great Reveal’ not many of the guests had solved the crime successfully.

With ‘Brigadier Balderdash’ alias Ed Levie convicted the assembled group were able to relax and prepare for a more normal Rotary meeting next week. 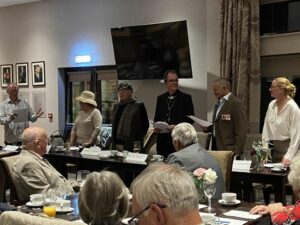