A View From the Top

On Tuesday May 11th the members of Middlesbrough Erimus Rotary clustered once more at their Zoom stations together yet apart for the monthly Business and Job talk. This occasion was witness to a remarkable succession of roles in local government featuring our own member Brian Dinsdale OBE. Starting in Northallerton Brian moved at an early stage to Lincolnshire where he met his wife Gill, an ambitious outlook saw him moving regularly to further his career and brought about an early lesson. The first of many royal visits in Brian’s experience was that of Prince Charles to Boston. Then very junior Brian’s role was to give guidance to members of staff with whom the Prince might engage- Just stand up, speak clearly, and call him Sir was the stock advice. Unfortunately, a seated operator took this very literally and jumping to attention at the Royal’s approach from behind, his head struck the regal chin forcibly and the Prince was floored.
Returning to Middlesbrough as Chief Budget office controller brought contact with Police and Social Services and Brian realised his desire was to work more closely with people rather than finances, he made time to take a degree and then successfully applied for the highly sought-after role of Chief Executive of Hartlepool Borough Council. This was a whole new ball game with 50 Councillors all with their individual agendas and a close involvement with the Teesside Development Corporation. Part of Brian’s management skill lay in sharing experience and as part of that exercise he spent time acting out many of the roles of his colleagues including emptying bins, cutting grass, and serving in the canteen, all of this gave him a much clearer idea of the other’s point of view. Developing the Marina was a special challenge, and a particular favourite was the Trincomalee Trust. Here the chief proponent was Captain David Smith RN who had previously had command of the Royal Yacht Britannia and thus it was that Brian and Captain Smith hosted the Late Prince Philip on several inspections of the world’s second oldest naval vessel afloat.
The election of Hartlepool’s football mascot Stuart Drummond as Mayor brought the town a great deal of unwanted publicity with 150 reporters attending the Mayoral Press launch – Brian uncomfortably recalled being interviewed by an Australian camera crew who were themselves dressed in Gorilla suits. The next career move was to Middlesbrough as Chief Executive and ‘interesting times’ serving alongside elected Mayor Ray Mallon. Brian was then appointed to the Treasury to act as local government advisor to that august body. Asked to write exactly 100 words as a ministerial briefing, his paper was ‘checked’ by senior Civil Servants and subsequently returned approved with all the contents amended to their complete satisfaction. Following the London experience Brian was appointed interim Chief Executive at Oxford and subsequently three other Councils before taking on the role of Chief Executive of the YPO (Yorkshire Purchasing Organisation) with a multimillion-pound budget. Although now officially retired he still finds time to Chair an arm of the North Tees Health Authority. Offering the club’s thanks David Jackson recalled fondly their shared experiences in local government and led a richly deserved round of Zoomed applause. 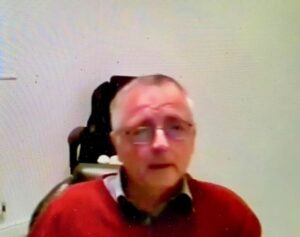