At our regular meeting, members followed a presentation by Steve Cox a former Air Traffic Controller. Steve’s story relates to an era many will remember when the hijacking of aircraft was a relatively regular occurrence. This specific event was a Lufthansa Boeing Flight 181 bound from Majorca to Frankfurt in October 1977 and ‘captured’ in mid air shortly after take off by four terrorists. Relating the gripping events as the aircraft was diverted first to Rome then Larnaca and subsequently Bahrein, on each flight the pilot was alone in the flight cabin apart from a single hijacker holding a pistol to his head. Many airports en route had blocked their runways with trucks and obstacles to deny the terrorists and their innocent passengers a landing opportunity.
The next stage brought the captive plane with almost 100 passengers and crew and very little fuel to Dubai where our narrator Steve was then a recently qualified Air Traffic Controller. There were three tense days and nights in a control tower populated by numbers of military, diplomatic and security personnel in addition to the authorised ATCs. At length and under extreme pressure the Boeing was allowed to leave and whilst refused permission to land at several more North African airfields it finally took the ground at Mogadishu in Somalia. Here the final drama was played out. The heroic pilot Captain Jurgen Schumann who had already sought to provide covert information on the hijackers was given permission to inspect the undercarriage after a heavy landing, he took the opportunity to link up out of sight of his captors with military personnel on the ground giving further intelligence on the two male and two female terrorists. Returning to the plane the leading terrorist Mahmoud suspecting trickery forced the pilot to kneel in front of him before shooting him with a single pistol shot to the head.
This action crossed a line and later that evening the aircraft was boarded by special forces using stun grenades after diversionary fires had been started. Three of the terrorists were killed whilst the passengers and crew all survived, only one suffering a shrapnel wound. It was a stirring reminder of times when flying had hazards which are now largely and happily elements of our history. Steve was thanked as he had been introduced by Rotarian Teresa Whittaker.
Club members then briefly struck another very different and much sweeter tone in welcoming the gift of a very large quantity of M&M s courtesy of Mars industries and via our newest member Jacqui Molyneux. Two of our local ‘linked’ local schools and our regular food bank recipients are about to receive a rather substantial and very chocolatey surprise! 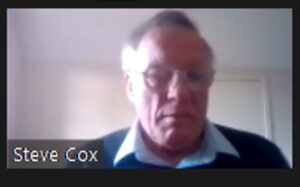 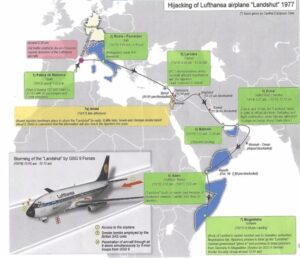