An Online Walk in the Park

On Tuesday March 2nd members of Middlesbrough Erimus Rotary were treated to a zoom around the North York Moors National Park guided by its recently appointed Chief Executive Tom Hind. For background Tom described his journey from Sheffield where, as a schoolboy he would help his uncle on a family farm, Post university Tom worked successively with the NFU, Tesco and an agricultural quango before his present appointment.

A presentation on the Parks history and developments was enlightening- with 26 miles of coastline,840 scheduled monuments, 1400 miles of Rights of Way and an estimated 8.3 million visitors each year there is plenty to do!

NYMNP, like all others is a free-standing local authority but owns very little of the land within its boundaries. With the task of conserving and enhancing natural beauty, wildlife and cultural heritage whilst promoting opportunities for the public to enjoy and understand its special qualities there are both challenges and opportunities. Tom explained that much of the natural conservation work is achieved through positive partnerships with landowners and the public whilst engaging with communities least likely to visit the park is a clear objective. Maintaining and improving access by foot, bicycle, horseback, and where possible wheelchair, is made possible through the efforts of 500 active volunteers who contributed over 8,500 volunteer days in the previous year. Rotary were pleased to hear that the National Park supported the efforts of Fest of Fun a charity which enables less advantaged children to enjoy school holidays because they too, support the same cause.

Looking forward Tom announced that work had just begun on a new management plan and invited any member of the public to log in and contribute to the process online. The main features are likely to include participation in developing a roadmap to Covid recovery, contributing toward Climate Change through adaptation and mitigation, assisting with the increase of biodiversity as well as walking the tightrope of balancing nature conservation and economic development.

In answering questions Tom agreed there is a real need to develop cycle routes across the Park with the possibility of links into the Teesside conurbation on the Park’s agenda. Trevor Atkinson, one of our members, was able to offer a compliment to the Park’s planning authority after his daughter’s recent move to the Park boundary at Great Ayton and this was accepted on their behalf with a big smile. Fred Hutchinson in delivering a vote of thanks expressed the feeling of all present that we had become a lot more knowledgeable and likely to visit the park on our doorstep for real very soon, thanks Tom! 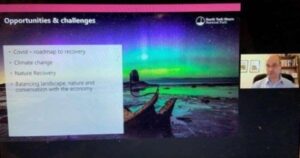