On Tuesday 19th July the hottest day in our history, members of Middlesbrough Erimus rotary entertained and were entertained by a former ‘Beefeater’ Colin Smith MBE, RVM, BEM. Before joining the small but very well-known contingent of Tower occupants and guides Colin had served for over two decades in the RAF and underwent a stringent selection procedure in which over fifty applicants apply for each post.

As a practised raconteur with many years of greeting the public Colin was both fluent and amusing as he covered over one thousand years of history embodied in the Tower of London.

We learned that building commenced in 1078 with wooden structures and now covers over 18 acres. Over time its role has included that of London’s Citadel, Royal Mint, National Record Office, home of the Crown Jewels and England’s first menagerie and zoo.

This Platinum Jubilee year its historic moat has been transformed into a wildflower super bloom area and Colin advised this alone was well worth a visit. Covering just a few of its former operations Erimus members and guests heard of the executions, Traitor’s Gate, Royal and treasonous prisoners, the attempted theft of the Crown Jewels by Colonel Thomas Blood (they never left the Tower) and some very gruesome torture instruments.

On a much lighter note, Colin described the process of locking up the tower each night, known as ‘The Ceremony of the Keys’ together with the fact that the ever present Ravens of the tower currently number 11rather than the normal 8.

Unusually Colin had been allowed to retain his uniform and this was displayed in its scarlet glory alongside a very sharp and gleaming ceremonial sword. 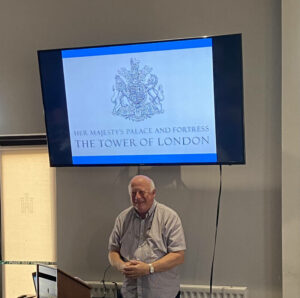