Beirut Comes to the Boro

On Tuesday March 22nd Middlesbrough Erimus Rotary received a Zoom visit from Beirut. Two members of Beirut Cosmopolitan Rotary club Habib Saha and Diana Cotran joined the group and Habib held all of the members in thrall for over forty five minutes as he delivered a truly comprehensive presentation.

The subject was Beirut and Lebanon, its History, Geography, Culture, Politics and Economy, Habib is a masterly presenter and the contents were a Tour de Force.

All of this, powerful and informative as it may have been, was simply a lead in to the description of a catastrophic explosion which devastated Beirut’s port area on August 4th 2020. The explosion of almost 3,000 tons of Ammonium Nitrate killed more than two hundred people, injured over six thousand and displaced upwards of three hundred thousand of the city’s population.

Pictures of the destruction and damage were relayed, and Habib then moved to the efforts which his Rotary club have and are making to restore essential services. Beginning with sourcing and delivering medical supplies, PPE equipment and clearing up damage and debris the club with its sister organisations Rotoract and Interact has moved on to play a major part in restoring Karentina Public hospital which is sited less than 1 kilometre from the blast site and suffered major damages.

Working with Rotary clubs across the world, including two Rotary groups in both Whitby and Northallerton Beirut Cosmopolitan Rotary club obtained a Rotary ‘Global Grant’ of over $390,000 which has enabled them to help fully equip a Paediatric Ward and Operating Theatre in the hospital.

In thanking Habib for a truly spellbinding presentation on behalf of Erimus, Joe Guerin reflected on the positive potential of international cooperation from like-minded people and with the echoes of conflict in Ukraine close at hand we left our meeting both wiser and yet with some positive thoughts at a difficult time

1) a single slide from the presentation

2) Karentina hospital after the blast

3) a link to part of the presentation

Rotary is a Worldwide organisation which is also Local, Middlesbrough Erimus Rotary is active in support of the community through Education,Environmental,Health and Welfare projects both at Home and Internationally – Learn more at www.erimusrotary.org 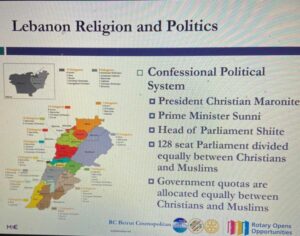 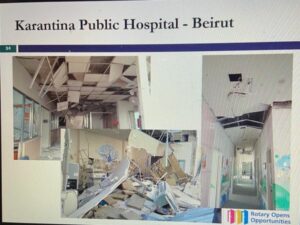 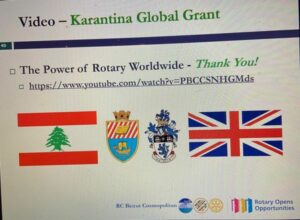