Brightening the Tees with Bulbs

After over a year of planning, a project to plant many more trees alongside the river Tees has begun- -with bulbs! Members from the town’s three Rotary clubs were joined by students from King’s Academy Sixth Form on the riverbank. Spades, trowels and significant energy saw the first two thousand mixed species go underground in a setting opposite the former Furness Shipyard and behind Teesaurus Park. Further bulb planting sessions will follow over the next two weeks and additional students from Macmillan Academy have signed up to assis . Rotary members are progressing an initiative to celebrate the Centenary of their oldest group. Later this autumn several hundred young saplings will be planted in the area which will eventually create an avenue alongside the Tees. This pathway, once the site of dozens of blast furnaces and busy jetties is now host to no less than three national trails. The hope is that by planting a tree lined route the well-used path will become a favourite ‘green’ transport link into central Middlesbrough.
Rotary is working in partnership with Middlesbrough Council and Mayor Andy Preston on the project and hope to encourage neighbouring businesses to make the Tees riverbank a green and pleasant place once again.
The picture shows our Rotary planting team ready for action 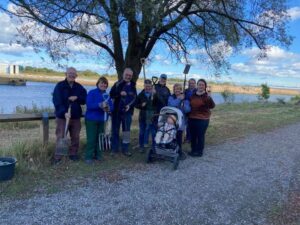