Business with the Waltons

Rotary business meetings on Zoom are not the stuff of which dreams are made and the Erimus Rotary programme team have added ‘Life Stories’ to the agenda to brighten those evening’s with a bit of ‘Reality Rotary’. This week’s episode of Life’s rich pageant came courtesy of Mike Walton and his voyage through the years…. On leaving school Mike took an electrical apprenticeship and, at its completion decided he needed to ‘See the World’. His transport and working passage was aboard various ships of the Esso fleet then one of the world’s largest shipowners. Joining his first ship as a supernumerary and scheduled to shadow the ‘Lecky’ for a training voyage his mentor promptly fell sick and was transferred ashore. Young Walton found himself effectively in charge of circuits and motors from day one and a bit like children thrown in the deep end found he could swim quite quickly. The SS Esso Cardiff was his training school and a routine of out and back to the then Persian Gulf from UK & Europe was the standard route. All went quite smoothly until a passage through the Suez Canal in 1967. War had broken out between the occupants of opposite banks of the canal and Mike’s ship was caught in the crossfire collecting shells from low flying fighter planes which fortunately did not cause explosions. His ship was amongst the last to leave the canal and older readers may recall not all vessels were so lucky with four being trapped in the Bitter Lakes for several years. Mike reminded his listeners that losing power in the Atlantic was no picnic, no seaborne AA or RAC, spare parts were what you had or could make, and trial and error linked to innovation was the only solution. 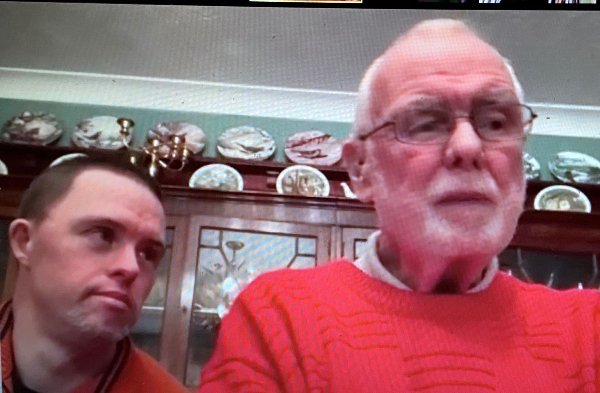 This can do attitude served well when shipmates were helping themselves from your gin store, a repeating problem on one ship with a tipsy radio officer, simply fixed when you add a little something to the gin and …..lets just say the offender never repeated the theft from Mike’s cabin! Times ashore could be fun but after-effects confusing as when Mike returned from a run ashore in Aruba, unsteadily returning to his cabin he slept off the rum punches. Rising the following day and greeting a new purser, recently joined he was advised that it was he, Mike who was new to the ship and not the purser! He had gone back not to his ship, Esso York which was about to sail but to an identical sister ship moored at the next berth downstream. Hurried and necessary position adjustments were made and the Esso York sailed with her Electrical Officer on board! There were good times in New York night clubs and sampling Italian hospitality during a long dry dock in Genoa, but the land was calling Mike back.

A ship contracting company on Teesside with whom he had done odd jobs were looking for an experienced manager and Mike, now happily married to Fern jumped at the chance to swallow the anchor. Progress with Mansons a ship repair operator was good and, as with all shipping, periods of frantic activity contrasted with quiet spells when there were no vessels alongside to service. Personnel issues were equally diverse dealing with everyone from company MDs and ship captains through to riggers and stevedores who on occasions arrived at work via the pub. When the general manager transferred to London Mike accepted that post and subsequently became a Director of the company. When Mansons diversified into other areas Mike was able to buy the Teesside operation and expanded his sphere of operations buying forestry and a sawmill to supply the companies timber dunnage (protective packaging) requirements. These were good years running a multi-faceted operation whilst the Tees was enjoying boom conditions. When a similar company made Mike and Fern an offer too good to refuse, they were smart enough to seize that opportunity and stepped back from the front line of ship operations. Mike’s story was delivered in company with his son Nick who is now our Honorary member and seated alongside him in the picture. Nick too has his own story to tell with no less than five medals from Special Olympics and is still training junior gymnasts and offering an exemplar of a positive contribution to life from a special perspective at Middlesbrough FC Foundation . Team Walton with wife Sue, two horses, four well trained gun dogs and a busy lifestyle continue making their contribution to Erimus Rotary.