Centenary celebrations begin in a Nursery

Today was the starting point for our Rotary Centenary Trees project – we began with on Saturday morning with a tree planting exercise at Hill’s Nursery on Station Road Stokesley. Eleven Rotarians attended from all three Middlesbrough based Rotary clubs. Initially we were treated to a crash course in tree planting given by proprietors David and Simon Hill. David is an active Rotarian from the Stokesley club. The first task, after instruction from David was to ‘Make your pots’. These are cunningly designed plastic containers, known as “air pots” because they allow for air circulation and drainage and are made up of a single, studded black plastic sheet which is folded around a circular base disc. As each volunteer got stuck into a task the job was completed with some speed. A brief pause gave time for David to give us another high-speed lesson in tree sizing, the availability or lack of it of separate species and the outdoor tree production line. Now the pots are transported to a planting area where the saplings are root and branch pruned before setting into the pots which have a compost filling. The young specimens are loaded onto a trailer and transported to their ‘line’- which is a staked row with single wire fastening at a height of 6 feet. The potted-up trees are then fastened to the wire, a strong cane staked alongside and further ties then strap them alongside their cane support and a plastic rabbit protector is wrapped around the trunks. The job was both satisfying and because of expert oversight completed in pretty quick time. Thanks to the generosity of Hills we have had a further 10 trees added to our initial purchase so at present we have 48 trees growing on, many of which will be ready to plant out this autumn. A big thanks to all who took part and of course to David and Simon without whose expert guidance we should not have progressed to this point. An article for release to the press will be written up before the weekend is out and its good to report that at last Tees Trees are in the ground. There will be an outside visit to the nursery at a later stage, hopefully this summer. 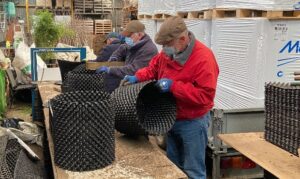 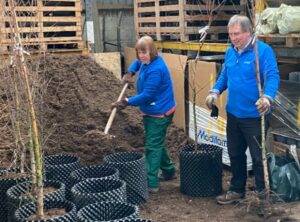 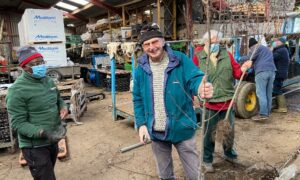 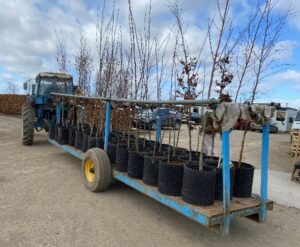