After almost eighteen months of Zoom meetings, Alleluia on Tuesday 7th September over thirty members of Middlesbrough Erimus Rotary with partners were joined by ‘Friends of Rotary ‘ for a garden centred get together. The venue was Cherry Hill one of the very few locally owned operations on Teesside. After a catered supper, brave souls who had joined during lockdown began to meet up with their colleagues whom they had previously only viewed on a computer screen.

A balmy late summer evening provided the perfect backdrop for Peter Wilkinson to tell the story of Cherry Hill’s growth from a much smaller beginning. Peter himself began work in the garden centre at the age of just thirteen travelling from neighbouring Newby and not expecting payment. Norman Wall, the original proprietor, surprised Peter with a wage after the first week of effort. Explaining the ‘Feast or Famine’ nature of nurseries in those far off days he explained that in the winter there was little or no trade on some days whilst on Bank Holidays the queues were so long that they stretched out of the car park.

Leaving to start a landscaping business at the now relatively mature age of 18, Peter continued to develop his horticultural and business skills. In 2010 when Cherry Hill fell into the hands of administrators his family’s buyout of the business was strongly supported by members of the original owning family. There were tough times again in the early years of Wilkinson Cherry Hill and most of the building and construction which has taken place over the past decade has been undertaken ‘in house’ sometimes working through the night to have premises up and running for start of business the following day.

President Alan Clifton thanked Peter for the hospitality and in turn Peter agreed to support the joint Middlesbrough Rotary clubs’ initiative to plant trees alongside the river Tees. It was great for members and falilys to meet up once more in a safe space and begin to resume life without a Zoom curtain- Encore! 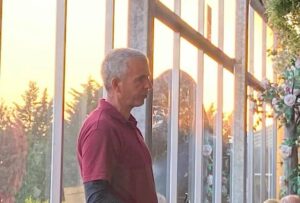 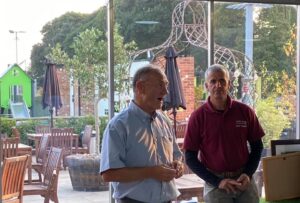