Thursday July 22nd dawned very early for sixty golfers in fifteen teams who were taking part in Erimus Rotary’s Charity Golf tournament at Middlesbrough Golf club. Players were on their tees at ten to six in a chase for birdies rather than listening to the birdsong. The event’s proceeds which are shared with the Club Captains saw a profit of over £1200 raised this year benefitting both the Gentlemen Captain’s Cause (Russ Devereux Headlight Charity) and Rotary local charities.  Erimus President Alan Clifton thanked and congratulated all those participating for their willingness to lose sleep in a good cause. Organiser Neil Glover was singled out for praise in overcoming a number of Covid related obstacles.  Sponsors included Cleveland Cables, Mick Davidge, Jim Taylor and the Starlight Dance Academy. Golf Club Gents Captain Anirvan Banerjee (who also captained the winning team) expressed his particular admiration for the work of a depleted greens staff. At the end of the early morning exertions there was a mighty breakfast bap with multiple fillings which some described as ‘Brunch on a Plate’. Departing golfers were heard promising themselves a cup of Horlicks – for lunch! 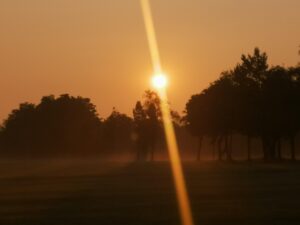