On Tuesday 5th October, 20 members of Middlesbrough Erimus Rotary and spouses were joined by seven Zoom participants in a second ‘hybrid ‘meeting.

The group were treated to a fascinating insight into the process and activities of the Lieutenancy by a North Yorkshire Deputy Lieutenant Mr Trevor Watson. Mr Watson has also served as a magistrate for forty years as well as a number of other appointments in the charity sector including Trustee of Five Lamps Social Enterprise and Chair of the Cleveland Committee of Crimestoppers. Mr Watson spoke on the role of the Lieutenancy, his appointment to it and several official events he had attended to give a flavour of the role. Mr Watson revealed Deputy Lieutenants are appointed by the Lord-Lieutenant, their name having been presented to and not disapproved of by Her Majesty. The Deputy Lieutenant wore the uniform of a General Officer and carried an infantry officer’s sword which was engraved with the badge of the Yorkshire Regiment. He went on to relate an amusing story of his visit to Imphal Barracks York for some uniform etiquette where the Garrison Sergeant Major whilst congratulating him on how smart he looked suggested if the Deputy Lieutenant stood in front of him, he would put it on properly!

In expressing his pleasure in carrying out the role and the personal honour of being appointed, Trevor was asked if he could mention a couple of highlight visits out of the many attended. He mentioned the difference in the type of event from the magnificent Candlemass Service in Ripon Cathedral to visiting the Redcar Sea Scouts annual meeting to present trophies and inspect the cadets, both memorable in their different ways and equally important. The Deputy Lieutenant mentioned another memorable event attended held at the Hindu Temple in Middlesbrough to celebrate their festival of Raksha Bandhan which is a form of Armed Forces Day which are regularly attended by the Lieutenancy representing HM The Queen. He went on to relate an amusing story centred on him removing his boots to enter the temple and his inability to put them back on himself, having to rely on the good offices of the Stockton Mayors Chauffer to alleviate his embarrassment!

Following on from this most interesting talk, Mr Watson took questions from the floor, one of them from a lady member who asked for the parity between male and female Lord-Lieutenants. Whilst not being able to give an exact figure, Trevor did say that the Lord-Lieutenants of North Yorkshire, Durham and Cumbria were all ladies and following on from another question confirmed that lady incumbents were still called Lord-Lieutenant.

Rotarian Brian Dinsdale gave a sincere vote of thanks and confirmed that we had all learned a great deal about the role of the Sovereign’s representative. 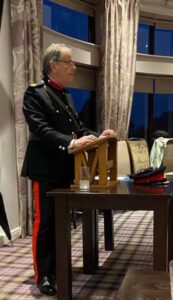 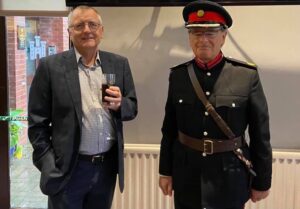