At the monthly business meeting of Middlesbrough Erimus Rotary club on Tuesday 9th November there was an extra guest.  Captain Nick Ward the new Salvation Army representative joined the club’s Zoom gathering to thank members for the ‘Wrap Up’ project which has been hugely successful. There was a ‘surprise’ present for Nick and his team when it was announced by Rotarian Mike Robson that the Staff of Cleveland Cable Company had made a one-thousand-pound donation towards the regular Salvation Army Christmas appeal. Nick’s zoom dance of delight online was then repeated when Erimus added promise of the the proceeds of two December collections at Teesside Park and the Parkway Shopping Centre. In thanking Erimus members Nick explained that with Rotary support last Christmas, Army staff had helped 871 families, provided 847 food parcels and brought a smile to 1600 children on Christmas morning with a wrapped festive toy. The prospects for this season are looking even more challenging but together there was a real chance to repeat last year’s success. 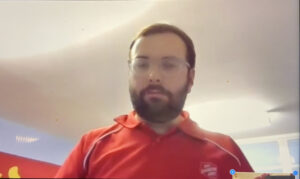