On Tuesday 6th September, the members of Middlesbrough Erimus rotary were given an absolutely fascinating insight to the world of TV production.
Jane Atkinson daughter of Erimus rotarian Trevor and Mary ,is currently Director of Global Production for Fremantle Television. Whilst Fremantle TV is not a household name in the UK, their productions certainly are ,covering a host of popular entertainment genres including ‘ X Factor’, ‘Britain’s got Talent’ and many more.
After Nunthorpe School, Sheffield University and a spell at Camp America Jane joined TV production on the lowest rung of its ladder helping out with many of the everyday tasks.
Through a career as varied as the programmes she is involved with, there were spells with Blue Peter, Strictly come Dancing and events coverage of major state occasions . All of these elements provided a talk which was both absorbing and eclectic as its ‘Stroll through a Career in TV Production’ title.
Taking just one anecdote of many , Jane described how in covering the One Life Concert at Manchester shortly after the awful bombing in that city , a Sky TV news helicopter agreed to stay over the venue and gave an amazing live feed from the air all organised by Jane on WhatsApp directly with the pilot!
Jane’s tech skills were extended in ensuring that whilst Trevor viewed directly from Middlesbrough Golf club, mum Mary Atkinson on holiday with friends in Amsterdam was patched in to the talk and tv clips on a laptop linked by wifi – equally proud parents from different locations.
In giving the Vote of thanks Eric Johnson expressed the thoroughly absorbing nature of what we had experienced by confirming he become so engaged he had failed to write up any of his intended notes-praise indeed!
Pictures show Jane presenting her remarkable story. 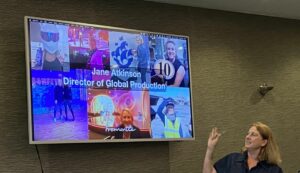