On Tuesday 2nd November Middlesbrough Erimus Rotary were treated to an excellent presentation delivered by Gary Bankhead. From his early life in the mining village of Pelton Fell Gary went on to combine a career as a Durham and Darlington firefighter with a sub aqua diving hobby. In 2007 following a chance remark by his wife Angela, Gary took a dive with his brother in the River Wear. A chance find on the riverbed turned out to be a silver trowel which had belonged to Archbishop Arthur Michael Ramsey! Whilst the trowel was dated 1961, its finding developed a fascination for Gary with underwater archaeology and has taken him through the stages of working with Durham University undergraduate students on his array of finds onward to himself gaining a degree in archaeology followed by a Master of Philosophy (MPhil) in the discipline.

Today Gary’s views on some aspects of recently discovered artefacts are sought across the world of medieval archaeology and he appears regularly in the television series ‘River Hunters’. Thousands of artefacts have been discovered dating from the12th century to our present day in a single trench close to Elvet bridge in Durham City. They include medieval pilgrim’s badges, toys, dress accessories,-buttons and buckles, household items, objects associated with trade and manufacture and lead cloth seals which amazingly still contain their centuries old textile preserved in the anaerobic underwater silt conditions. An online exhibition ‘Hidden Stories from there River Wear’ tells much more of this fascinating story. Dave Whittaker in giving a vote of thanks spoke for all in welcoming a remarkable voyage of discovery in a drysuit which has floated Gary to the top of the archaeologist’s tank! Many thanks

Pictures show a screenshot of artefacts, the silver trowel and the textile manufacturing sites of some of the cloth seals 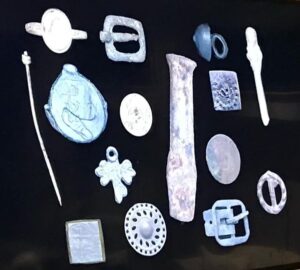 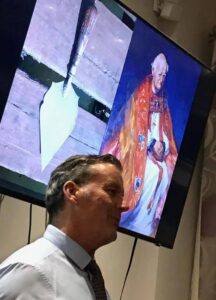 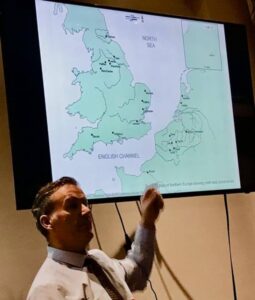