On Tuesday 20th September over a dozen members of Erimus rotary were joined by guests from the former Middlesbrough club.

On Tuesday 27th September 25 members and spouses of Erimus rotary visited Middlesbrough College and learned a great deal about one of the town’s most impressive learning hubs. Before enjoying a three course meal in the Waterside Brasserie the College’s Principal and CEO Zoe Lewis explained some of the history and developing story of the modern cluster of buildings.
Formed from four separate higher education establishments- Longlands ,Acklam Hall, Kirby College and the Marton Road Campus this freed up much needed land for family housebuilding across the town.
The new site is actually directly adjacent to commercial Middlesbrough’s birthplace, the coal drops of Port Darlington. There is nothing old fashioned or backward looking about the college’s facilities much of which is open seven days a week .
Links with local industry have been crucial from the outset and facilities within the STEM centre are testament to the ongoing cooperation. A high tech digital education centre has a counterpoint with the Community engagement college which provides basic language and lifeskills to a cohort who include asylum seekers and those in need of literacy and numeracy support.
Like many similar institutions Covid -19 hit fast and hard at the college which closed down overnight and subsequently had vans crisscrossing the area delivering lap top support for ongoing learning. Today there are over 5,000 lap top computers in use as supportive learning tools.
Zoe explained that following several decades of falling birthrates this trend has now reversed and Middlesbrough College is preparing for the growing demographic alongside a changing industrial backdrop. The College seeks to match its subject offering to ally with anticipated demands and is confident that, in a business with an annual turnover of over fifty million pounds annually, it can help grow what was once termed ‘The Infant Hercules’ into a well educated and confident adult.
Following the meal Molly Shaher. head of Hospitality training took Erimus members on a tour of the College’s facilities and the group left feeling that tomorrows Middlesbrough citizens had much to gain from the college on their doorstep.
Pictures show Zoe and Molly delivering their message 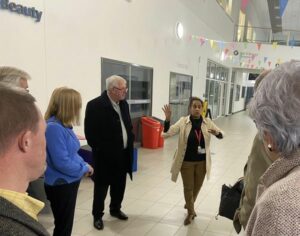