Erimus learn history of the Web!

On Tuesday July 13th as our Zoom seats seem ready to be removed for a dose of reality and face to face fellowship we took a look back at the short but eventful life of the World wide Web. Our guide through more years than we had anticipated was our own Rotary member Stuart Davies which was appropriate as he has been our Zoom Pilot these last sixteen months. Stuart explained first his own journey from writing simple programmes, developing an online shop in 2000 to his present role assisting small businesses with their online presence.

Astonishingly we then went back to 1958 and President Eisenhower ensuring Cold War communications security with ARPANET and many, many acronyms later we got to where we are today! By 1969 two universities (Stanford and UCLA) had been connected- ironically the first message transmitted which should have been login crashed after the first three letters had been sent. In 1971 Ray Tomlinson developed the e mail – it didn’t make him a household name,  but he is responsible for an awful lot of messages, not all completely necessary.

Sir Tim Berners-Lee played a large part in the early development of the web and was given the credit he deserves.  We travelled forward across the Dot Com boom when Amazon was just a bookselling stream into the twenty first century and social media for all of its good and ill facets. There was a good deal more before Stuart finished a fascinating look back into web history with a tutorial on how to stay safe online.

Pictures show Stuart presenting and a screenshot of the first ever website. 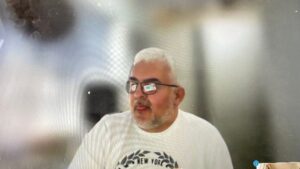 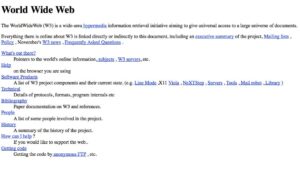