On Tuesday 6 December, 39 members, spouses and friends of Middlesbrough Erimus Rotary were given an excellent presentation on Tutankhamun by Rebecca Baugh. Rebecca has studied Egyptology and Archaeology  at Manchester and Durham Universities and is aiming for a doctorate in Egyptology.

The presentation covered the finding of the tomb in 1922 by Howard Carter and the massive effort, over 10 years required to remove, photograph and catalogue the 5398 items found in the burial chamber.

Scans showed that Tutankhamun had a club foot so that’s the reason for the walking sticks. Nothing to indicate the reason for his death was found during the body scans.

Rebecca explained that the tomb was robbed shortly after it was closed up in 1323 BC , probably by those responsible for the wall  paintings . The thieves only stole high value perishables such as incence, alcohol and perfume. It would have been too obvious if they had stolen and tried to sell the golden artefacts.

Tutankhamun was only 19 years old when he died and even though many theories have been put forward there is no evidence of the reason for his death. The fact that his mother and father were brother and sister may have resulted in some genetic issues that may have contributed to his early death.

The inner coffin was covered in gold leaf with a value today of £1m. The burial mask is one of the most striking and beautiful discoveries.

Tonight was an inspiring presentation by Rebecca an expert just back from visiting Tutankhamun’s tomb in the Valley of the Kings, Egypt.

David Jackson gave a vote of thanks on behalf of members, spouses and friends of Middlesbrough Erimus Rotary Club. 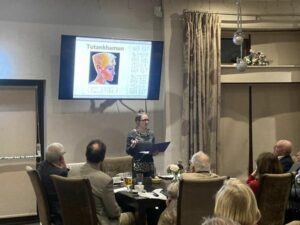 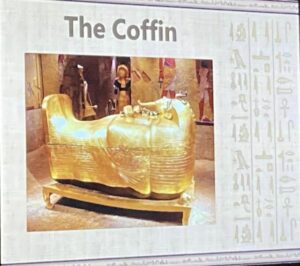 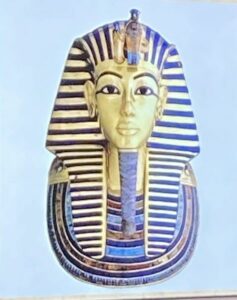