The monthly Speaker meeting for Erimus Rotary was a glimpse of the future with electric vehicles on Tuesday 2nd February. Chris Bayliss a highly experienced motor engineer presented insights built on a framework commencing as a Nuffield engineer progressing through a number of very senior positions in the automotive industry to developing his own engineering consultancy.

Chris explained that whilst the conundrum of installing sufficient electrical power into a motor vehicle rapidly continues, there are many technical barriers being broken down. Ten years ago Chris was involved in an endeavour which saw an electric car built in the North East break the quarter mile ‘drag speed’ record from a standing start in less than ten seconds. This contrasted with alternative successes using Nissan manufactured batteries to power warehouse robot vehicles which will work for eleven and a half hours on a thirty minute charge.
Whilst positive about the prospects for electric vehicles Chris acknowledges the hurdles presented by infrastructure and power capacity describing the latter as ‘Something which leaders are going to have to get their brains around’.
Various pioneering systems are being trialled across the globe – in Scandinavia heavy goods vehicles travelling on major roads are drawing energy from overhead cables as per trams of old and switching to onboard batteries on the side roads for the start and finish sectors of their journey. Elsewhere buses take a stop to stop power load from ‘super capacitors’ at each halt. Here in the North East if the pandemic allows Chris will take his junior versions of electric powered racing cars to Croft Autodrome in June where children from as young as eleven will be able to race around silently but speedily.
There were of course many questions following but perhaps the answer which brought the greatest sighs of relief was when Chris confirmed that battery life was something like 7,000 to 8,000 cycles-or put simply- the car will expire from old age well before its batteries do- No need for a pacemaker then!
Erimus best known petrolhead and former rally navigator Neil Glover who had introduced Chris delivered a vote of thanks and our members and guests gave a well earned round of applause.
Pictures show Chris presenting and junior racers hopefully set for Croft 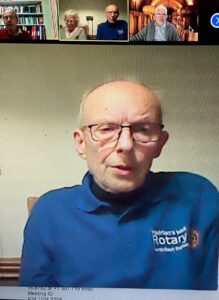 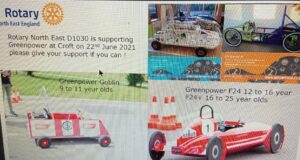