Erimus Learns of Life Before Darwin

As life returns to normal members of Middlesbrough Erimus Rotary returned to their usual meeting place at Brass Castle and were treated to an insight into the life of HMS Beagle and her crew before the arrival of Charles Darwin and his developing theories on evolution.

The presentation of this fascinating story was by a family member of Beagle’s ‘Pilot’ or navigator James Kirke. As Michael Kirke, his descendant, explained Beagle was a small vessel carrying just ten guns, a little over 90 feet in length and 25 feet in beam. James kept a diary of his time aboard HMS Beagle and it was excerpts from this which Michael used to describe a way of life which might best be described as ‘challenging’ in many respects.

We learned that although modern methods had by then enabled sailors to consume meat preserved in cans, unfortunately these containers were sealed with lead and this probably led to a great deal of illness and death amongst crews of that era. Michael then related diary entries of huge gales with Beagle being laid over on her beam ends as well as losing her topsails as she carried out surveying tasks off Terra Del Fuego and Cape Horn.

Kirke’s diaries went on to describe several ‘Man Overboard’ losses, desertions, the suicide of her Captain Pringle Stokes and the capture of four native Fuegians who were brought to England and subsequently repatriated. As a result of the surveys a major navigable channel which shortens the passage around Cape Horn was named the Beagle Channel.

Picture shows Michael Kirke presenting the diaries of his ancestor 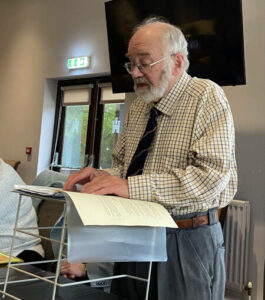