Erimus learns the cost of being rescued

On Tuesday December 14th Middlesbrough Erimus members were Zoomed together once more for an in depth look at Cleveland Search and Rescue Team. Their information was delivered by Pete Mounsey who has been a member of the organisation since the mid 1970s since when he has served in a number of different capacities.

In all there are over 50 Search and Rescue organisations including more than 2,000 active ‘rescuers’ operating across Great Britain with one group for each upland region.

Casualties include mountain bikers, horse riders and paragliders but the largest group are simply walkers and hikers. The Cleveland team numbers 44 Search and Rescue members, from a wide variety of backgrounds, all of whom are unpaid volunteers subject to a 24hour/ day call-out potential. They in turn, are backed up by 16 Support members who contribute to the team in a variety of ways including fund raising and acting as casualties during training exercises

With a control vehicle and two very highly equipped and modified Land Rovers operating out of a custom-built control centre in Great Ayton the operation has annual running costs of over £42,000 per year almost all of which must be raised via donations from the public and other charitable sources.

Searches are instigated following 999 calls and alerts may be transmitted via either police or ambulance control centres. In recent years the team has incorporated a group of swift water rescue personnel who require a high degree of personal protection and recovery kit. Training is an ever-present aspect of the rescuers role and Pete confirmed that even after over forty years in the team he continues to learn and develop fresh skills and insights.

Pictures show screenshots from Pete’s presentation which are self-explanatory. 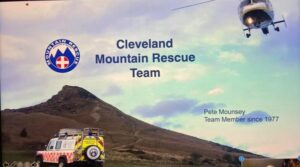 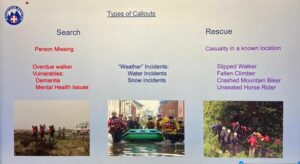