On Tuesday January 4th members of Middlesbrough Erimus Rotary gathered for their first zoom of the year. David Milner, a friend of many of its members presented the fascinating story of Whitby’s rediscovered Muster Rolls. David was part of a group of volunteers working on the conservation of the historic documents at North Yorkshire County Record Office. The rolls had been rediscovered in the roof of Whitby’s former Seafarer’s Hospital building and then handed over to the town’s Lit & Phil Society

David explained how the muster rolls gave crew lists for vessels sailing in and out of Whitby over the period from 1745 to 1806. Their contents included several references to explorer James Cook’s early seagoing career aboard Whitby built colliers. Sailors paid 6 old pennies per month as an insurance to cover them for sickness or incapacity and the muster rolls were a written record for that purpose. During part of this period Whitby was a busy and important port ranking second only to London for ship visits. David and fellow conservators took records of ‘Incidents’ from one in ten of the written records and were thus able to show that of 934 records over 300 incidents occurred-16% related to sickness,45% sadly to deaths whilst 39% ‘ran’ or deserted-many of these latter were to escape the dreaded’ Press Gangs’ who would forcibly capture merchant sailors and draft them into service with the Royal Navy in time of war. There was not enough information from the Muster Roll sample to obtain meaningful comparisons and so to complete the picture some information for the important Whitby whaling industry was presented – Whitby’s whaling fleet included 58 ships undertaking 577 voyages to the waters around Greenland . Each trip was around 4 months duration and returned with catches varying from 0 to 7 whales.  Sadly, no fewer than 17 of these perilous voyages resulted in a sinking plus one lost in a fire which was the probable reason for the demise of the whaling trade. Geoff Taylor spoke for all in thanking David for a behind the scenes look at Whitby long before the advent of either Fish and Chips or Dracula! 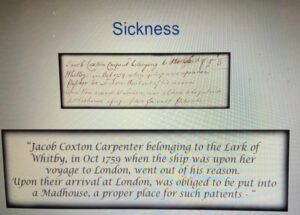 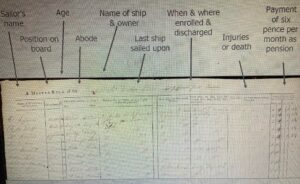