On Tuesday 20th September over a dozen members of Erimus rotary were joined by guests from the former Middlesbrough club.

A majority took the delightfully scenic Esk Valley train which as summer ebbs away is still well filled with travellers keen to catch its faltering rays. After ogling steam survivors through Grosmont – we missed the ‘Sir Nigel Gresley’ by just twenty minutes, our party arrived at Whitby bang on time. A relatively brisk walk to the harbour and back gave a modest excuse for Trenchers the well named fish and chip restaurant,. 75 minutes of animated conversation and sixteen empty plates later it was time for the Main Event.

The Captain Cook Memorial Museum is a part hidden gem of Whitby’s multi faceted tourism crown. Tucked away down Grape Lane with great views over the harbour its interior once housed an apprentice James Cook and today host many artefacts and artworks related to one of the world’s greatest navigators and nautical surveyors. Our guide was Sophie Forgan who has worked assiduously for decades to ensure this small but beautifully formed museum continues to pay public tribute to one of our regions greatest sons.

All too soon its time for the return journey ,peaceably separated from returning school students for whom the line is a brilliant example of the value of public transport.

It was a one off Rotary meeting but one which will live long in the memory of its participants. 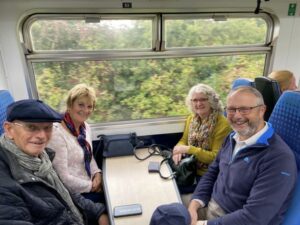 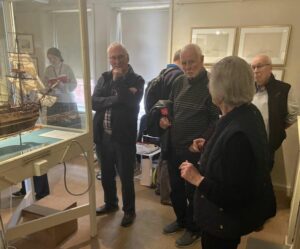 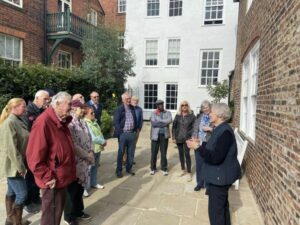