In the second year of a pioneering project, Middlesbrough Erimus Rotary linked up with
thirteen collection points across the town and its surrounds inviting people to donate unwanted warm coats , scarves and gloves. These are passed on to five local charities (The Salvation Army, Nite Lite, Teesside Family Foundation, Open Door and St Vincent de Paul) who redistribute the clothing to families and people in need this winter.

Once again the generosity of local people for their less fortunate neighbours has come to the
fore with another record haul of over 1200 coats plus more than 400 other items of warm clothing donated.

Community Service Chair Dave Whittaker expressed his delight at the outcome and particularly
thanked the Salvation Army whose premises were used to store and sort donated items. “We
hoped for a good response but were not sure it was possible to repeat our first year’s total – our town’s public continue to be very generous”.

President of Erimus Geoff Taylor praised the public spiritedness of local people, thanked all ofthe collection centres and promised to repeat the project next year. “We love the fact that
donating a warm coat costs the donor no money but awards the recipient a really valuable gift” said Geoff
Erimus member Jacqui Molyneux who first brought the project to Erimus said she hoped the success would spread to other parts of the North East going forward saying, “ I think this is a perfect way for Rotary to replicate its positivity across our communities and we should push for a wider scope next year” 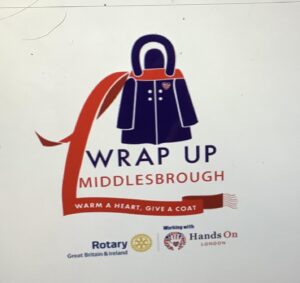 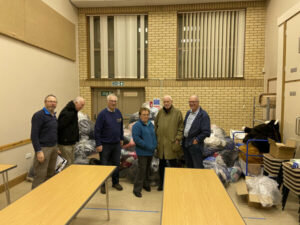