Afternoon Tea float with a Princess

Tuesday June 21st saw the Summer Solstice celebrated by members and guests of Middlesbrough Erimus Rotary afloat on the Tees. Once boarded at Castlegate Quay along with other guests, the ‘Teesside Princess’ took its passengers in glorious weather upriver.

Amongst unexpected sights were over 50 swans upping around near Stockton centre, a sole heron engaged in a staring contest with a singleton swan and a very cheery multitude of students celebrating the end of exams on the riverbank. Once above Stockton the scenes were remarkably rural and on several reaches there are quite simply no houses to be seen. Afternoon tea afloat was a three tier affair with a basement level of sandwiches, middle layer of scones topped off with sticky cakes-decadence afloat.

In fifty two years since the last commercial ship sailed from Stockton there have been numerous changes to the waterfront including a redundant minesweeper, steel replica of Cook’s ‘Endeavour’ and a barrage enabled greening of the riverbanks. Now, as our guide explained the next major redevelopment is about to begin with the demolition of a very plain multi storey car park which will be replaced by landscaped Riverside Gardens.

Erimus hope next year to celebrate this transformation with a major fundraising walk from Middlesbrough’s Riverside Stadium to Stockton’s Riverside Gardens and back. The route follows no less than three national trails and is probably Teesside’s best kept secret…..but not for much longer!

Pictures show Rotary at tea afloat and a heron-swan face off. 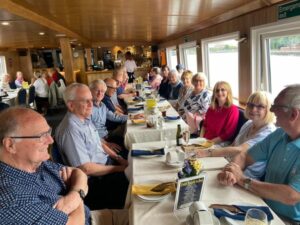 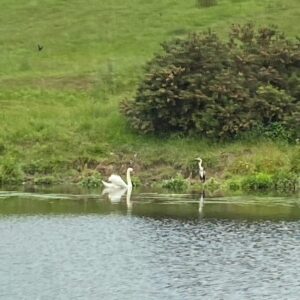