It shouldn’t happen to a vet? It did to this one!

On Tuesday February 15th Middlesbrough Erimus members were zoomed face to face with Lewis Grant a former vet and born raconteur who regaled members with tales of his early career. Qualifying at Edinburgh included live animal anatomy lessons from a veterinary professor who was terrified of the animals he was describing. in 1968 a newly qualified Lewis first joined a country practice in the Scottish Borders at the then little-known town of Lockerbie. The senior partner took young Lewis out to his first callout to attend a large horse. A journey in his chain smoking bosses small saloon car saw Lewis with a lap top passenger in the shape of a very flatulent terrier, his senior’s pet – it made for an unforgettable introduction to a vet’s life! After various learning experiences Lewis transferred to a practice in the Yorkshire Dales in 1972 and here the tales recounted were entirely coincident with the James Herriot stories we are all familiar with.

Attending a callout to a remote dales farm in the early hours Lewis asked the torch holding farmer to switch on the lights only to hear that although the farm had electricity its owner ‘didn’t think it worth replacing the bulbs once they burnt out ! A friendship with the ‘real’ James Heriot’s son led to Lewis being asked to review a pre-publication copy of Heriot’s first collection of stories, Lewis’s judgment that it would sell well with the public was of course proved absolutely correct.

A vote of thanks was offered together with some affirming remarks on the content by Erimus’ own former vet Jacqui Molyneux and the pair agreed that whilst some modern practices were positive there was a great deal to like about the veterinary life of earlier decades.

Pictures show Lewis presenting and Jacqui giving a vote of thanks 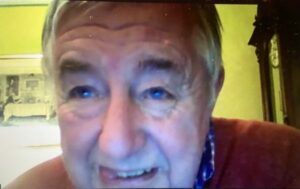 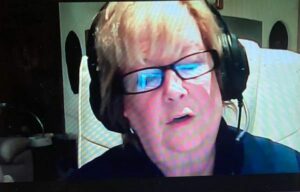