26 members of Middlesbrough Erimus Rotary and Cleveland Rotary had a joint meeting by Zoom on Tuesday 29 March.

Jackie Young, leader of Middlesbrough Community Champions presented about the work of the group,

Jackie Young first started Middlesbrough Community Champions volunteer group in 2018, aiming for a cleaner and litter free and greener Middlesbrough to make a difference to the town.

Anyone who does something for the good is a champion.

Jackie has some great initiatives ongoing for example, approaching schools to do litter picks and developing education packs to use with the local primary schools to present at assembly. Last week Jackie presented at an assembly for 650 primary school children.

President Alan Clifton thanked Jackie for the excellent presentation and asked if there were areas where we could cooperate in the future.

Jackie has several simple ideas where we could work together for example further work on the tree planting initiative along the River Tees.

After the Guest Speaker the two Presidents gave an overview of activities. Middlesbrough Erimus Rotary President, Alan Clifton, talked about the club structure, the ongoing international project to support Ukraine and other members explained the varied Programme and fellowship activities and the many community projects and activities the club are involved in.

Robin Smith, President of Cleveland Rotary, explained about their young carer initiative with great results taking young people for away days. The Gambia project shows good progress sending chairs and tables for use in schools. The Easterside development project is showing good progress including the development of an allotment. Another idea being developed is “the kindness group” to provide support for disadvantaged people with help from others in the community.

The conclusion from these presentations was that there were plenty of ways the two clubs could further build on cooperation.

Photo shows members of the two clubs on Zoom 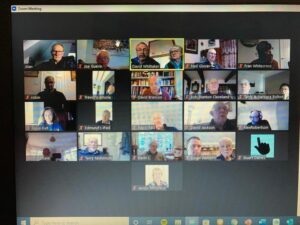