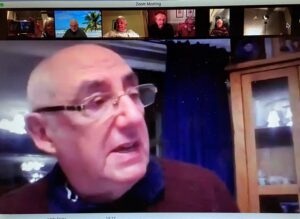 Erimus Members and Time Travel Tales
The latest meeting of Erimus Rotary was thrown open to the stories of times past. Rotarian Mike Robson has been compiling a compendium of the club’s activities over the first thirty five years and this was a nudge for other members to bring their clearest recall to the process. Mike led out by describing the Great North Bikini Challenge when the club sought to wrest the Guinness Book of Records title for the most bikini wearing ladies on a beach from Bondi Beach……..At Redcar!
Despite well over 350 entrants the chill of a July morning proved tooo much of a handicap but the Great North Air Ambulance for whom the sponsorship was destined did land on the beach and over £7,000 was raised.
The club’s exploits as the first group to use the Transporter bridge as a fundraising platform was another highlight which in 2000 garnered over £18,000 in six and a half hours and led to other organisations using the iconic structure for Zip Wires,Abseiling and Bungee Jumps. Founder President Walter Pattison recalled his adventures playing cricket overseas for a Great Britain Rotary team which in its turn brought a competitive group of Indian Rotarians to Teesside where four games were played .
Club members were reminded that in this, the most testing year of our existence, thanks largely to a pair of dedicated ‘techie’ members, Erimus had met every week on Zoom, Rotarians continued to donate their Dinner money to Food bank support whilst members and wives had funded and sewn significant quantities of ‘scrubs’ in support of our heroic health workers. President Dave Whittaker urged all members to add their contributions to ‘Erimus the first Thirty Five Years’ and closed a different meeting with the usual final toast of Rotary- The World Over!