Rotary Gets Circular Around Cleveland

One of Middlesbrough Erimus Rotary members took the group on a virtual cycle ride around Cleveland on Tuesday April 13th. It was when walking the Cleveland Way that David Branson pondered the creation of a similar circuit on two wheels across minor roads and bridle paths.

The result, after a good deal of research and some strenuous pedalling was a 120 odd miles of scenic cycling and a guide book to show the way. Following the route, we, on our very stable Zoom platform left Lord Stones on a speedy downhill prologue. The circuit travels via Whorlton with Castle and church thence up to the Drove road following the leather shod hoof prints of cattle driven from Scotland to market on this high level pathway. Rievaulx in its majestic ruin and castellated Helmsley are visited before biking Eastward through Kirkdale with St Gregory Minster, Hutton le Hole, Lastingham and Pickering. All these destinations host gems of historic interest for which there was only time for a brief inspection before rolling onward. Levisham Mill thence Dalby forest lead the rider to Hackness Hall with its walled gardens but without a pause its onward to Scarborough’s outskirts and the famed cinder track. Once a well-used railway, now the easy rider cycle track with few gradients and many great views. Ravenscar and the alum works get a mention and then its Whitby, the Synod and another reminder of early Christianity in our part of the world. Little time for prayers before pedalling on to Grosmont where our industrial past is kept alive with the North York Moors Railway. Next is a toll road toward Rosedale where once again both religion (the Abbey) and past industry (both glassmaking and ironstone mining) get another airing. Deep breaths for now comes a brutal climb up Chimney Bank…… or is this GOAW (Get off and Walk) territory? Time now for another former mineral line, ideally suited to the weary cyclist as we pedal along the Rosedale Railway as far as Battersby Incline.

Here, at its summit, yes, we can pause to examine the superb cast model erected by the HLF funded Land of Iron project before taking in the superb views of the Cleveland Plain laid out like a tablecloth with chequered patterns of housing and industry across its surface. From Battersby there is a final though energetic ride across the Cleveland escarpment via Hasty Bank and below the Wainstones before we regain our start point at Lord Stones.

David’s book ‘ The Cleveland Circular’ is still readily available and having zoomed across that epic journey in less than forty minutes several of us are now preparing to take on the real thing. We shall of course be taking rather longer for our less than epic Rotary ride simply because there is so much history and so many views to take in that to rush would be to spoil it, don’t you agree? 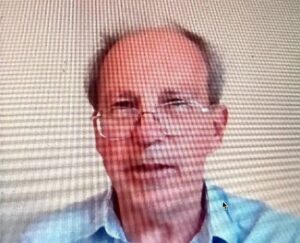 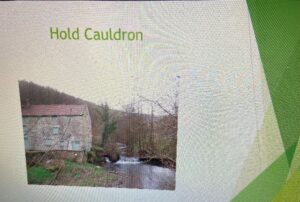