On Tuesday 15th March members of Middlesbrough Erimus Rotary visited what might now be called ‘Spring on Tees’.  An area behind Teesaurus Park, previously rather neglected and unloved has been significantly improved thanks to the efforts of Middlesbrough’s three Rotary clubs with enthusiastic support from the local council, Boro Community Champions and Mayor Andy Preston.

Over 5,000 bulbs were planted last autumn and dozens of trees planted alongside the river bank where once blast furnaces and a busy river dominated the landscape. Today this quiet riverside path is host to no less than three National Trails -The Teesdale Way, National Coastal Path and Sustrans Route 1 from Inverness to Dover, which also links the urban centres of Stockton and Middlesbrough with a ‘green’ travel route.

Last weekend Rotarians were active planting the next hundred trees destined for this site at Hill’s Nursery Stokesley where they will spend the summer before joining their older cousins alongside the river on ‘Rotary Centenary Avenue’. A further 5,000 bulbs are planned for the site and once again Rotary plan to involve local schoolchildren in the planting process.

There are hopes for additional sponsorship which will enable the avenue to be extended upriver to the Newport Bridge creating a one-and-a-half-mile long avenue of trees spelling out for walkers and cyclists the transition of Teesside from its industrial past toward a greener future. Rotary in turn hopes to dispel a sometimes stuffy image and display its environmental ambitions through this and similar projects across the area.

Rotary is a Worldwide organisation which is also local to Teesside. Middlesbrough Erimus Rotary is active in support of the community through Education,Environmental,Health and Welfare projects both at Home and Internationally . Learn more at www.erimusrotary.org 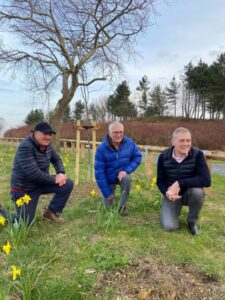 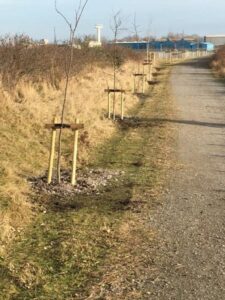 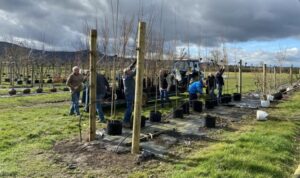