Last week was the culmination of several months of preparation as over fifty sturdy young trees were planted alongside the river Tees by members of the three Middlesbrough Rotary clubs in a long-standing celebration of their eldest member’s Centenary. The process was greatly aided by a team from Middlesbrough Council led by Area manager Peter Chapman.

Mayor Andy Preston enthusiastically welcomed the initiative confirming “If anyone wants to see what great work Rotary does in the town then this is a great example which begins adjacent to our newly refurbished Teessaurus Park”.

President of Middlesbrough’s Senior club John Hemy praised the teamwork of the three clubs saying, “We have all contributed toward a century of giving toward the people of our town and this is a visible expression of that service”.

Alan Clifton, President of Erimus Rotary spoke for his members confirming ‘We wanted to provide a lasting reminder to the people of Middlesbrough that we are here to help going forward just as we have been in the past”.

Mike Overy who acts as assistant governor for all ten clubs based across Teesside joined the support saying ” across this area in good times and tough times we try to support our communities in practical ways and this exercise is a good example of our environmental focus.

Area Manager Peter Chapman is equally delighted to see Rotary members getting behind his team’s efforts. “My guys are really delighted to get this kind of support from volunteer helpers, the passing public have seen us working together and are really impressed”.

Geoff Taylor, Erimus member and instigator of the project confirmed that an earlier phase had seen 5,000 bulbs and over 600 whips planted close to the riverside path which few people recognise is now host to no less than three National Trails . “We are turning this section of the Teesdale Way into Treesdale Way and with the latest we are painting the riverbank ‘Fifty Shades of Green’”.

Rotary is a worldwide organisation but is also local to Teesside, Middlesbrough Erimus Rotary is active in support of the community through Education, Environmental, Health and Welfare projects, learn more at www.erimusrotary.org 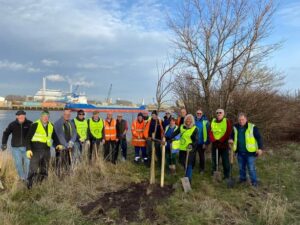 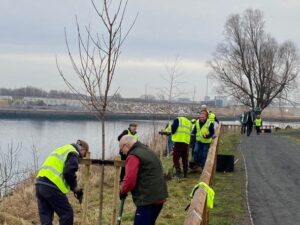