Teesside’s own Masterchef goes back to School

Eugene McCoy the legendary chef and hotelier returned to school at King’s Academy on Thursday 24th November to act as judge in the Middlesbrough Erimus Rotary club’s Young Chef competition. Twelve students stepped up and took the challenge, each producing a three

course meal in just two hours. Eugene tasted every item and gave a detailed and helpful critique to each junior cook. There were two winners who simply couldn’t be separated, and they will go forward to a North East regional final and if successful, compete for the Rotary National Young Chef 2022 title.

outcome. “The children were wonderful, any early nervousness and produced some really tasty treats which we all of course needed to sample!”

chefs and their efforts-“We were all impressed and delighted at how well the students took to the challenge given the time constraints and lack of experience, they are a credit to the school’ he said.

cooks to ‘Keep on Cooking’. “The more you practice the better will be the result” was his simple but wise advice and it looks as though there are at least a dozen King’s Academy pupils who will always be grateful to ‘The Real McCoy’.

Pictures show Eugene and Barbara, Eugene with food and Eugene with Mike Overy and Jacqui Molyneux of Erimus rotary 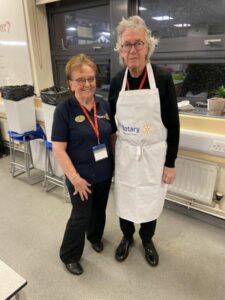 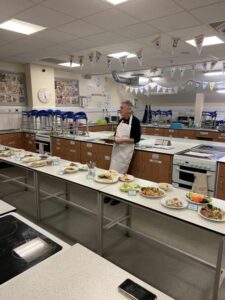 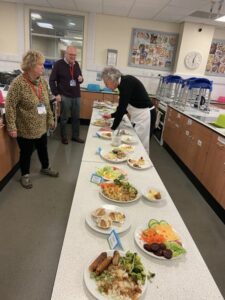