Three goes into one for Centenary Golf

A glorious summer’s day saw the three Middlesbrough Rotary clubs combine their efforts to tee off the celebrations for the Centenary of their original club’s founding.  Bryan Sloper of the Erimus club and an organising group from across all three clubs had spent some months preparing and the sunshine joined them as sixty golfers played their way across Brass Castle’s fairways and occasionally off them in pursuit of the competition prizes sponsored by Melling financial Planning

A well-stocked Tombola and gift stall ensured that Zoe’s place would benefit from the day’s sporting endeavours whilst a visual display reminded golfers and visitors alike of some of the most memorable achievements by Rotary in Middlesbrough over that long period. “In many respects this represents a Century of giving, not only fundraising but support for the town and its people” said Mike Overy the Rotary Assistant Governor for the Teesside group of clubs.

As the weather cooled a presentation took place with Golf Club Gents Vice Captain Craig Marwood welcoming players.  John Hemy, President of Middlesbrough Rotary thanked both sister clubs for their support and reminded everyone that this was simply the first stage of a three-part Centenary event. The second will take place on November 14th exactly 100 years since first being chartered, the senior club will host a grand celebration dinner at Jury’s Inn Middlesbrough. As a final lasting tribute the three clubs are preparing to plant an avenue of trees alongside the river Tees behind the ‘Dinosaur Park’ upriver toward the Newport Bridge.

The photographs show President John Hemy presenting a ‘nearest the Pin’ award to Judith Glover; overall winners Ed Levie and Peter Redding receiving their prizes from John; and a display of the three clubs’ endeavours across the years. 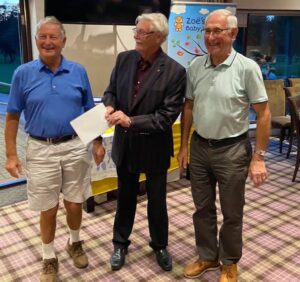 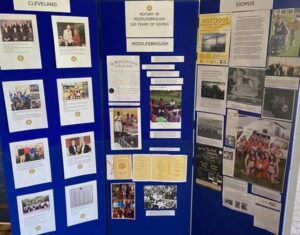