Three into one for nuclear robotics

On Tuesday September 28th Middlesbrough’s three Rotary clubs put their laptops and iPads together for a three way zoom meeting. Their guest speaker Professor Barry Lennox delivered a fascinating presentation on the use of robots in nuclear decontamination.

Beginning with a little history he confirmed that the first nuclear reactor to go live in 1932 Chicago included an axe wielding man who was poised to cut through a rope holding the control rods if the experiment went wrong.

We moved forward through the development of nuclear weapons to hear of Britain’s pioneering use of atomic power and the unfortunate legacy of pollution which is steadily being addressed.

Robots are now the safest and most efficient clean up tools and Professor Lennox described the inexpensive yet highly effective models his team have designed and built to carry out specific tasks. Lidar or laser driven radar beams give accurate and secure guidance to their movement whilst performance and capability continues to improve alongside advancing technology.

Following questions Rotarian Mike Overy offered a vote of thanks and the three clubs then discussed plans for the Centenary of the first Middlesbrough club in November.

John Hemy, President of the senior group confirmed that David Ellis, Great Britain’s highest-ranking Rotarian would be present at a Jury’s Inn Centenary dinner on November 14th. Robin Smith, President of Cleveland Rotary was able to announce their members would be resuming face to face meetings once again at Acklam Rugby Club whilst several fundraising projects for local young carers and schools in Ghana were on track. In closing the meeting, President of host club Erimus, Alan Clifton, explained the multiple activities which its members had carried out in recent weeks ranging from community garden support in both Coulby Newham and Great Ayton, a fundraising bike ride at Middlesbrough Sports Village and leading a Centenary golf tournament which had raised significant funds for Zoe’s Place.

The following day would see a team from all three clubs begin to plant thousands of bulbs alongside the river Tees in a project which will eventually see a Centenary avenue of trees planted along the Teesdale Way taking Rotary into a partnership with Middlesbrough for the next century using the voluntary support of its members. 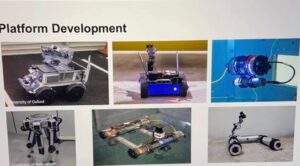