Three Middlesbrough Rotary clubs get the jab – in theory

On Tuesday March 30th a record 52 Middlesbrough Rotary club members from the borough’s three clubs zoomed in to get the Coronavirus jab.

Well, they were given the jab in theory rather than in the arm because our two speakers Dr Sharon Stephen and Dr Graham McPherson have been heavily involved in the manufacture of the Novavax vaccine at Billingham. The first slide inevitably was of Boris Johnson’s visit to the Fujifilm site on February 13th and the second covered the recent announcement of the ‘Fill and Finish’ contract awarded to GlaxoSmithKline’s Barnard Castle site.

Sharon explained how after working at ICI her career path had taken her to Fujifilm and the Billingham site where her present task was liaison with their customers who were spending several millions of pounds on their products. Graham’s career had included senior posts in quality management which both speakers were at pains to stress is the prime element in the manufacture of vaccines.

We were introduced to biologics and the fact that this form of chemistry is not a case of mixing chemicals in test tubes but is a wholly biological process.

Fujifilm has four sites manufacturing Novavax, two in the USA, one in Denmark and the Teesside facility. Billingham is already producing vaccine, but the extensive quality and rigorous regulatory system means it will probably be late summer before getting into our arms. The process of producing raw vaccine was covered in some detail and time after time both of our speakers returned to the topic of quality control and checking, every handwritten note relating to the process must be retained for future inspection whilst the same care and attention is paid to the PPE clothing worn by those involved in the biologic manufacturing process. Members and guests were left in no doubt that the Billingham vaccine will have been given the closest possible scrutiny for the benefit of all its recipients and happily Graham was able to indicate a really encouraging 89.3% efficacy rating for the Teesside vaccine. In offering a vote of thanks their neighbour Rotarian Mike Robson spoke for us all in expressing enormous admiration for the brainpower, energy and quality focus which will help keep this invisible enemy Coronavirus at bay. An additional item of business was the presentation online of a Rotary Certificate of Appreciation to our two presenters by the District Governor Barbara Broadbelt who as a Billingham born and bred lady was particularly proud of the local success. 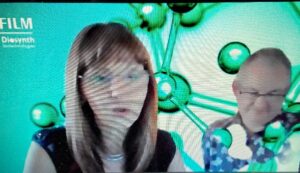 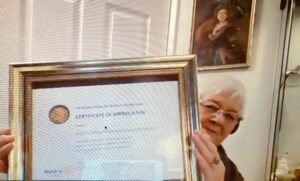