On Tuesday May 17th Erimus Rotary were joined by visitors from several other clubs across our area who had joined to hear our guest speaker Danny Brown from Darlington who gave us an update on Rotoract, the organisation for younger people who wish to follow the Rotary ethos of Service above Self. Danny explained that each Rotoract group is now a free-standing entity once established and can be based upon either a local community or university. Much satisfaction can be gained from working with friends and colleagues simply doing ‘Good Things’ within and around the local community and all present agreed there was a potential to sponsor at least one Rotoract group in the area.

A bonus for the evening was the presentation of a further cheque for £1,000 to support relief efforts in Ukraine by Darlington Rotary President Peter Phillips. This brings to over £38,000 the total donations from North-East Rotary clubs which are delivered to Erimus twin club Inowroclaw in Poland ensuring that every penny donated is spent on the ground where it is needed on what is desperately needed. Incoming district governor Steve Rose, also from Darlington briefly addressed the members promising his team would work to support individual clubs achieve their ambitions in the forthcoming twelve months.

The following week Tuesday 24th May saw Erimus own future aspirations laid out for the membership as incoming club officers spoke of their plans for a new Rotary year commencing in July 2022. These will include a second ‘Wrap Up’ Collection in which Erimus arrange for members of the public to deposit unwanted warm clothing at specific points which are subsequently distributed by local charities to those who are in significant need. Wrap Up’s debut in the North-East was arranged by Erimus in 2021 and was a big success, now the hope is that several other Rotary clubs across the area will join the project.

There are plans to continue planting ‘Tees Trees’ alongside the river with a possible major fundraising event in mid-2023. Many of the regular annual events are to be repeated but a plan to work more closely with neighbouring Rotary groups will figure strongly going forward.

Sunday 29th May saw Erimus members and partners travelling out of district to visit Thornton Hall Gardens which were absolutely magnificent. Many specimens, including Heucheras and Lilies, familiar plants but here arrayed in their best summer finery across borders reclaimed in the 1990s from their Elizabethan origins-absolutely stunning. The gardens open regularly across summer, and we shall return!

Pictures show Danny presenting on Rotoract , Peter Phillips presenting £1,00 donation for Ukraine and some of the fabulous Thornton Hall specimens 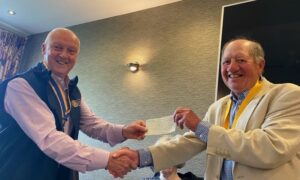 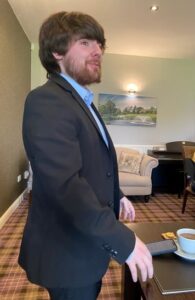 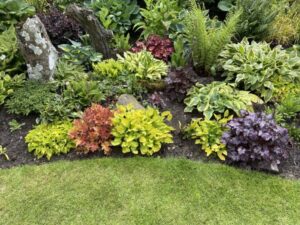