On Sunday December 12th members of Middlesbrough’s three Rotary clubs were joined by the town’s ‘Community Champions’ and Linx Youth Club in a joint endeavour which will change the landscape of both Teesaurus Park and the riverside environment. Over 600 young saplings were planted across a hillside behind the dinosaur park as work goes forward to celebrate the Centenary of Middlesbrough’s first Rotary club alongside a major upgrade of the riverside pathway.

Host to no less than three National Trails the cycle and footpath is rapidly becoming recognised as an environmental jewel in the centre of Middlesbrough’s historic Ironmaster’s district. Erimus Rotary members have planted over 5,000 bulbs alongside the river and plans are in place to plant a riverside avenue of trees leading upriver toward the Newport Bridge.

Mayor Andy Preston was on hand to support the volunteer efforts and declared his delight at the positive energy donated by all concerned.

President of Erimus Rotary club Alan Clifton paused from planting to thank Boro Champs for their help and support as well as coffee and mince pies!

President of the town’s original Rotary club John Hemy expressed his satisfaction that their Centenary was being marked in a fashion that would last for many decades into the future.

Community Champions Middlesbrough spokesperson, Jackie Young spoke of her delight at being able to work with a like-minded group of community volunteers and looked forward to future cooperation.

Originator of the tree planting project Geoff Taylor spoke for many in expressing the hope that, as this former industrial heartland was transformed, more of the town’s residents would recognise the green and pleasant place that was growing and spreading toward the towns centre. 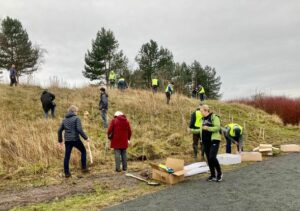 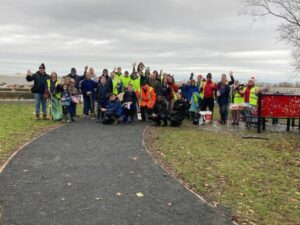 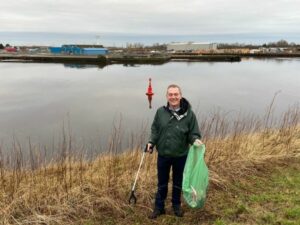