The autumn sees the start of the Rotary youth competitions and despite the challenges, schools are facing, Middlesbrough Erimus Rotary have concluded the first stage of the competition. Entries from youngsters in the Junior and Intermediate age groups were wide ranging in style. The judging panel were impressed by the high standard.

This year’s theme of ‘My happiest day ‘certainly allowed for some freedom of expression with many of the entries harking back to times before the present pandemic impacted us all.

The winning entries in the junior competition came from students at Lingfield Primary. A wonderfully worded Haiku poem was runner up whilst the winning entry recounted the authors adventures on a camping trip with her parents and some friends. A truly memorable account which expressed the fun and wonderful memories of trying to keep dry whist crossing a muddy pipe over a stream – well not quite successfully as they say. Playing superheros at the play park with a great day finished off with juice and hot chocolate around a barbeque: a day she will remember for some time.

At intermediate a large number of entries took the judging panel some time to adjudicate, after much deliberation the results were concluded with the winning entries being written by students at The King’s Academy. Poetry was well represented with the judges recognising a well-constructed poem on the theme of overcoming adversity. The winning entry recounted, in prose, the memorable day when the Radio One ‘Big Weekend’ came to Middlesbrough. Her recollection expressed the emotions in the build up to the day, the anticipation of queuing for the gates to be opened and the joy of seeing live performers who had previously only been seen on TV or the internet. All this alongside her friends whilst dodging the rain showers.

All four entries have now been sent to the next round of the competition where they will be judged against other entries from the North East district. We wish them well.

The photos show the junior winner and runner up upon receiving their certificates. 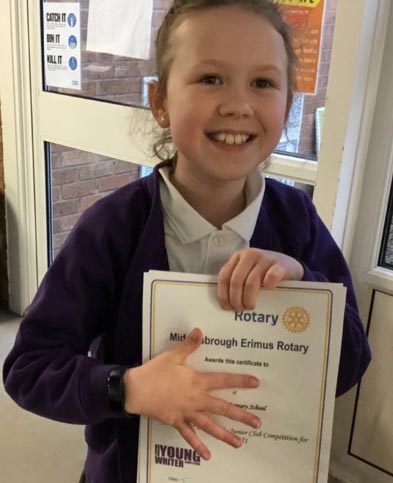 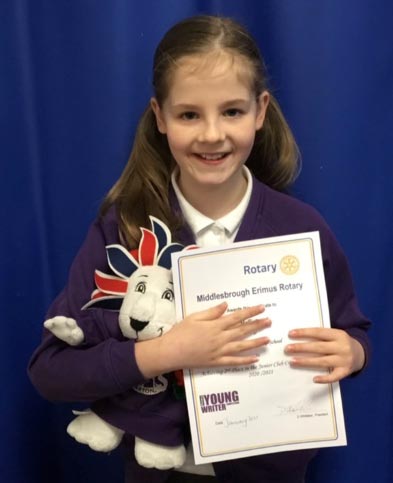