Zooming Across the Atlantic

On Sunday May 16th in a first for their members- Middlesbrough, Yorkshire UK met Middleborough, Massachusetts USA through the medium of their Rotary clubs. Hands were held across the sea courtesy of a Zoom connection and over thirty members of the respective clubs were able to take part.

Each side gave a brief presentation on the club’s activities and the history and nature of their similarly named home-towns. It was fascinating to discover that the two very different communities had a shared background in ironmaking but the US town’s specialism of cranberry growing had the Teessiders searching for a comparator. Each club has been supporting its local community’s food banks over the past year and educational support featured heavily with both groups.
A further link was brought to bear when it was pointed out that Captain James Cook’s Endeavour was built thirty miles from Middlesbrough UK and scuttled as a block ship in Newport Rhode Island a little over thirty miles from Middleborough USA. The respective members will now consider ways in which the two sister clubs can extend their partnership which may yet result, very appropriately in a ‘Joint Endeavour’.

Pictures show, A transatlantic screenshot, our US cousin presenting and a shot of a Middleborough Mass. heritage display 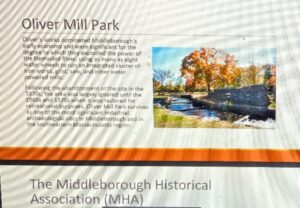 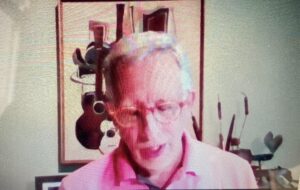 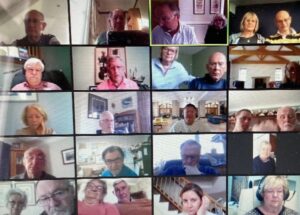