Zooming in to Presidents Night

A Rotary President’s Night is often the excuse for a four course dinner, tuxedos and posh frocks- Covid has changed all that for everyone including Middlesbrough Erimus Rotary members and their guests. It was much more a case of Allo, Allo, Allo as we gathered before the laptop screens in striped jumpers and red berets. This was to be a self-catered, bring your own drinks and socially distanced get together…… Or should that be stay apart event?

Once the usual banter had subsided, it was into our script – A Murder, Mystery night script played out online by a well-rehearsed group of volunteers set , as you may have gathered in a wartime French bistro. We had a couple of French waitresses who were free with their charms, a long-suffering proprietor and the obligatory dodgy German officers all addressing the murder of a shot down British airman who had been subject to a ‘Lockdown'(sorry!) in the hotel. There were 46 participants including the cast and as the cryptic clues were disclosed over the course of our play the mystery deepened. Members of the cast had agreed not to look at the final page in which the murderer of ‘Johnny Upstairs’ was revealed so that they too could join in solving the murderous puzzle.

Eight teams of amateur detectives then split to their respective teams of four to six to decide upon a culprit and each was then given the virtual floor to come up with their verdict and motives.

Let’s just say that some of us got it right and other theories were both interesting and imaginative! Our President Dave Whittaker was then roundly congratulated across the various screens and with a one-off toast to the Queen, recently passed Duke of Edinburgh and Rotary the World Over we departed from a very different but very original President’s night for the short walk to our usual evening armchairs. 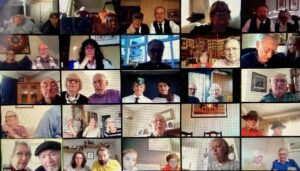 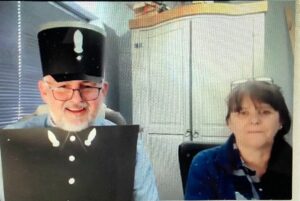 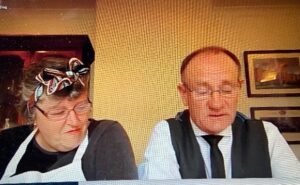